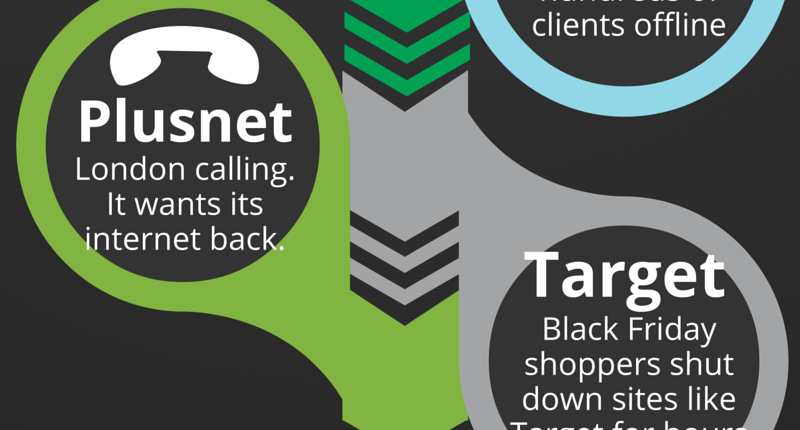 Out with the old and in with the new! So what are you getting rid of as we head into the New Year? Now is the time to reevaluate what triumphs you need to build on, and what shortcomings you need to cut loose. These are common practices, but sometimes we need to turn our lens outwards and study the successes and blunders of the industry as a whole. We decided to take a look back at the biggest internet outages of 2015, examine what went wrong, and how a repeat of these events can be avoided.

Why: Blamed on an internal DNS error.

This was one of the most memorable outages of the year, being that it was the most expensive. Experts estimate that the 11 hour long outage cost over a million dollars per hour, with the grand total costing Apple over 13 million. After investigation, Apple released a statement blaming the outage on an internal DNS error.

Even though Apple is a massive corporation with an internal DNS infrastructure, we can still learn a great deal from this event. You can never have too many layers of redundancy, or failover protocols to prevent your site from going down completely. The Apple outage of 2015 was a worst case scenario that effects too many companies that overlook the fundamental connection that keeps their company online.

Affected: Millions of customers from Seattle to San Francisco

At first, Comcast claimed it was a hardware malfunction that brought down nearly the whole west coast. However, it was their attempts to redirect traffic that ultimately resulted in an outage. Comcast attempted to redirect traffic away from the failed server, but their backup locations were unable to handle the traffic load and slowed to a halt.

This is a scenario we often see among large national (or international) companies who suffer a local attack or outage, and try to fix it by redirecting traffic to other nearby servers. However, if these backup facilities aren’t large enough to handle the doubled (or even tripled) traffic then it too will fail. Constellix DNS has an airtight global infrastructure that spans across 16 geographically unique PoP’s. Our network is so strong it could handle an entire data center outage and continue to run effortlessly.

Affected: Cloudflare and Github (among many other clients)

Why: Name server addresses were unresolvable

DNS provider, Dyn, suffered an outage this past Summer due to unresolvable name server addresses. Sounds like a mouthful, but it was simply an internal error where name server address records were removed from the dynect.net zone. This little mistake had a ripple effect that led to companies like Github and Cloudflare suffering widespread site outages.

Usually, we’d advocate using a Secondary DNS provider that would take over your domain’s query load if your primary provider were to suffer an outage. However, since name server addresses were deleted, this wouldn’t have been a viable solution. The lesson we can learn from this is to simply do your due diligence when selecting a provider, and always have your own backup plan in case your provider does go down.

Amazon actually suffered two major outages this year, once in August and then again in September. Both seemed to be the result of server glitches at their Ashburn, VA point of presence. The August outage made headlines when clients like Netflix and Tinder were unable to provide services to their US East customers.

A localized outage like Amazon’s could potentially be mitigated through the use of traffic redirection, to reroute traffic away from problem areas. While this may result in latency, it’s better than being down all together.

Historically, some of the largest and most widespread outages tend to stem from internet and broadband providers. This year telecommunications giant, Plusnet, went dark due to an internal DNS error, knocking a huge portion of the United Kingdom offline.

Customers took to Twitter to rant about the inconvenience, while others were more resourceful by sharing a way to bypass the outage through the use of public DNS. Many went into step by step instructions on how to use public DNS servers like 8.8.8.8 (Google) to get reconnected to the web.

Affected: Millions of customers attempting to access the site

Why: Failure to redirect traffic

Every year there is always a slew of brand name retailers being brought down by unprecedented amounts of traffic during Thanksgiving weekend. This year big names like Target, Neiman Marcus, Victoria’s Secret, and PSN all took a hit when they were taken offline by the influx of traffic. However, Target was able to quickly recover by using virtual “shopping lines” or queues to allow traffic to come onto the site and checkout in increments. Now this wasn’t a quick fix, rather this was the result of months of preparation and investing in development to pull it off.

Target’s extensive preparations and successful backup plan (although inconvenient to some customers) serves as a great example of how to handle inordinate amounts of traffic. While your company or organization may never see numbers like Target did, the most important best practice of running an online storefront is to be prepared for anything. Now this can mean a great deal of practices in itself, from using monitoring tools, to implementing failover protocols and having a backup plan in case everything else fails.